WALKING ON THE MOON

On July 20th, 1969 Neil Armstrong and Buzz Aldrin landed the first manned mission to the Moon aboard the Apollo 11 landing module. It was then and remains to this day the biggest moment in the history of manned Space Exploration. To celebrate this achievement, on the same date 50 years later we decided to commemorate the anniversary of these Astronauts’ famous first steps on the Moon by creating this unique art work called “Walking on the Moon”. From an idea by Spacelab creative director Naomi McDonald the piece was brought to life for young visitors to Esplora Interactive Science Centre on the island of Malta, and who were each invited to have their right foot painted in colours of their choice, and then to take one small step and leave their lasting impression on the artwork you are experiencing here. In all nearly a hundred children (and a few children at heart!) from twelve countries took part in the creation of this unique work of art which is here on permanent display at Esplora.

I Walked on the Moon 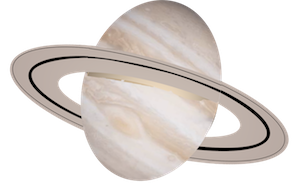 I am Saturn, sixth planet from the Sun and second-largest after Jupiter.

You will recognise me from my distinctive rings which are formed of billions of pieces of ice, dust and rocks. As big as houses or as small as grains of sand.

Galileo Galilei was the first person to observe my rings through a telescope way back in 1610.

Remember to hover over the egg to discover the true colours of Saturn and tick the box on your Galactic Checklist!

“Walking on the Moon” Partners