We would love to hear from you. You can reach out to us across time and space via the contact form below or directly on email. 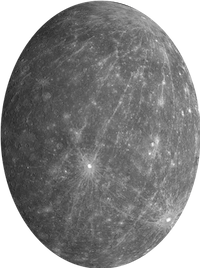 I am Mercury, the baby planet of the Solar System and the closest one to the Sun. It takes me just shy of 88 days to orbit the Sun so a Mercurian year is very short compared to Earth’s.

Like Earth, I am a terrestrial planet which means I have a rocky core. Several probes have visited me including NASA’s Mariner 10 (the first to visit in 1974-5) and Messenger.. BepiColombo, a joint mission by ESA and JAXA is expected to reach my orbit in 2025.

Although I am very close to the sun observations suggest that there is Ice present. You can usually see me in the twilight sky to West just before and after sunset so next time you’re having sundowners play a game, see who can spot me first! I look like a very bright star.

Remember to hover over the egg to reveal the true colours of Mercury and to tick the box on your Galactic Checklist!